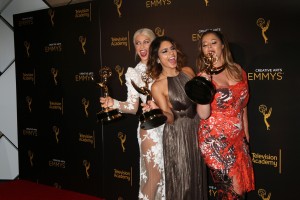 Dancing with the Stars pro Julianne Hough and NHL star Brook Laich tied the knot in a lavish ceremony on Saturday. The affair, held at the Coeur d’Alene Resort in Idaho was straight out of a James Bond movie.

Julianne wore a strapless Marchesa gown with a cathedral-length veil. The dress, according to E!News, is estimated to cost around $20,000. Brook wore a classic black and white tuxedo from Brooks Brothers.

The couple arrived to the ceremony by boat around 6 pm. Guests, seated in wooden chairs in a field, carried parasols to stay cool in the shade.

The reception was also held at the resort, where fireworks were lauched at the end of the evening.

The wedding looked like something out of a fairy tale, but just like any real life wedding, the day wasn’t all smooth sailing. AOL reports that the bus transporting the bridesmaids and groomsmen made a bad turn and went into a ditch.

Thankfully, the wedding party was transported to the reception in smaller vehicles.

The bus snafu caused many of the guests to arrive late, as they were forced to take the long way to the venue.

Other than a slight traffic issue, Julianne and Brook’s wedding went off without a hitch. And their dreamy wedding photos are enough to make any woman swoon.

Prior to the big day, Julianne and her husband hosted a pre-wedding party on the lake.

The couple had been engaged since 2015. Julianne said it was love at first sight.

“When we saw each other for the first time, it was like ‘And we’re done.'”