He isn’t quite as popular as The Household Hacker, but Kip Kedersha (better known by his YouTube user name Kipkay) is already one of YouTube’s most respected gadget gurus. And, more recently, the infamous inventor of the World’s Loudest Alarm Clock.

If you love tinkering with electronics, then KipKay is your go-to guy. 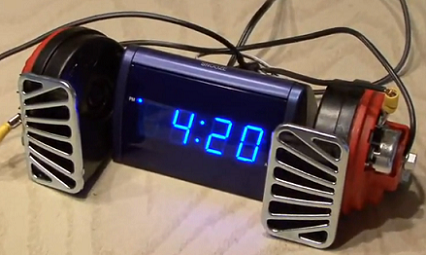 Unlike most self-proclaimed DIY gurus on YouTube, Most of Kip’s how-to videos aren’t easy to accomplish for beginners. While I can appreciate Kip’s ability to come up with crazy inventions, buying parts and soddering aren’t activities I’d like to spend my day doing.

Many of his 170,000 of his fans, on the other hand, aren’t shy when it comes to trying out his tutorials. Just days (or even sometimes hours) after he uploads his how-to video of the week, it isn’t uncommon for videos of attempted hacks to pop up.

Here we have a classic hack that modifies what the Staples Easy Button says. To purchase the parts to make this visit Kip’s official site.