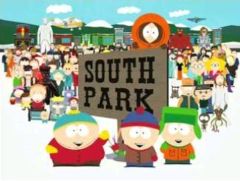 Below is a list of South Park Series 10 episodes which you can watch right now online for free.

You can make these videos full screen usuaully by clicking on the video image as it plays or clicking a zoom button (if it’s there). This will make it fit your full browser window, to make it even bigger press F11 which will make the South Park video take up even more of your screen.

List of South Park Episodes to watch online for free from Series 10 up to November the 15th (episode 14).

How is this possible?

All the South Park videos listed above have been uploaded to the video sharing site DailyMotion. DailyMotion is a lot like YouTube but with far less strict controls on copyrighted content. As a result it has become a haven for copyrighted TV Shows allowing anyone with a broadband internet connection to watch regular TV shows.

Web TV Hub does not host nor upload these episodes of South Park, nor does it condone such practice. Our goal is simply to educate and connect people with the growing amount of video content on the internet.

Update 27th Nov 2006: Some links to episodes stopped working so these have been replaced with working ones. I will come in and replace the links with working ones every now and then. Some of these videos are now appearing on YouTube as well as Daily Motion.