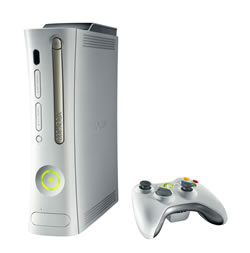 Exciting news has come out of Microsoft this month stating that the Xbox will be launching a Web TV service towards the end of this year.

Whether you can get the service depends on how good your internet connection is since a beefy connection will be needed so you can watch and record two high definition web TV channels and 2 standard definition channels simultaneously.

The Web TV edition of the Xbox should feature a 120GB hard drive, HDMI ports, will come with DVR functionality and you will be able to take advantage of the Xbox 360 community-based features, such as voice chat, sending and receiving text and voice messages, and accessing Xbox Live Marketplace, while watching TV. You can also play games while recording web TV.

It’s not yet known what sort of TV content we can be expecting from the Xbox 360 Web Television service but it is expected that Microsoft will be hooking up with the TV networks to create Web TV Channels.

Do you have a website about Games? Well you can get it listed in the Big Web Links Directory. – Play internet based games for a lot of fun
– Software for cell phone game to be played by the cell phone users.
– Games for computers and cell phones
– Video games for the elders and kids
– PS3 – the great games console for kids
– Enjoy the online games offered by the different web site owners.